Ok first off I'll be updating this post as I go, some things may be missing for now. Part 1 will be about the design process, and Part 2 about keyframes and storytelling through images. Here we go...

Going into this project I wanted to showcase my taste in design and break down my process.

Overall in my portfolio, the design process behind things was lacking. The ideas behind a lot of images weren't apparent and I want to change that. Along with just making some art/designs that I am proud of.

So going forward I will be explaining my process in designing the world of "Etiam".

For the story of "Etiam", I decided on going with a story of a creature that attacks an asteroid mining operation, and they have to fight back for survival using their equipment (hello dead space lol). It's a simple premise but I always find things like this fun. Also, space is cool :P

Going into this project I wanted to nail down the aesthetic right away. What would the look of this world be? How would it affect the design decisions I would be making going forward? What would the purpose be? These were the questions I was asking myself among many others. Starting off I wanted this project to be based around an industrial space aesthetic, with lots of hard metals, crossbeams, plating and so on. On top of that, I liked the idea of having electromagnets being a key technology in this world I would be building. I wanted to have the technology going into this to all have that technology as a component in their design. Having those two elements gave me a good place to start. Now I had a real path to head down! Working from this I started writing down ideas of possible elements that would be needed. What elements do real-life mining operations have, and how could I translate those into a space setting?

I started by writing down what I think would be needed after having a few talks with my girlfriend. This is the initial list of vehicles and elements:

This was my list starting off, so now I had a couple of goal points to aim for design-wise. I started off with the Asteroid tug I already knew that I wanted a two-prong design, reminiscent of a catamaran in shape.

The purpose of this design is to be able to push asteroids that were broken up by a bigger drilling ship in a cargo ship. 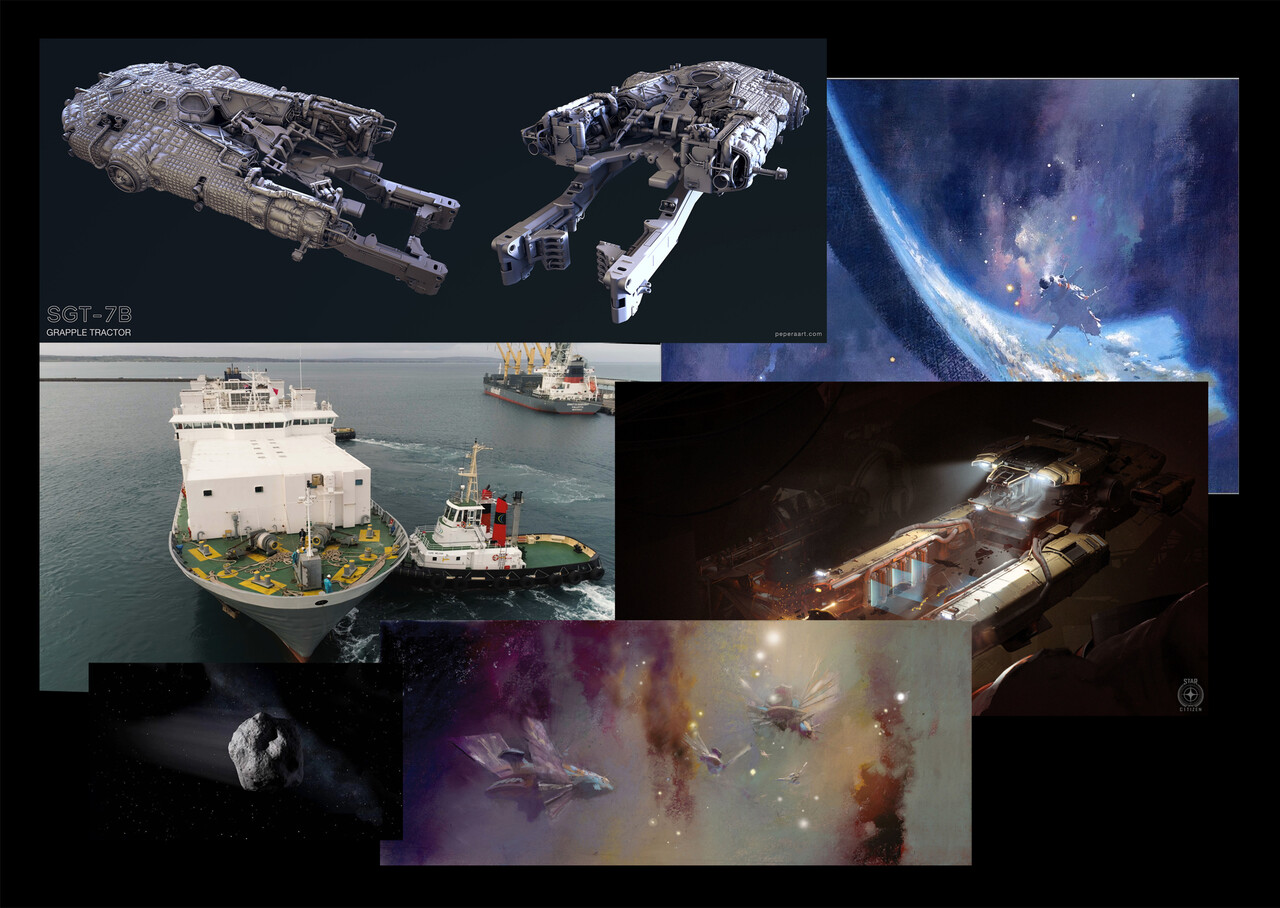 From the above reference, I started doing thumbnails and developing the idea. 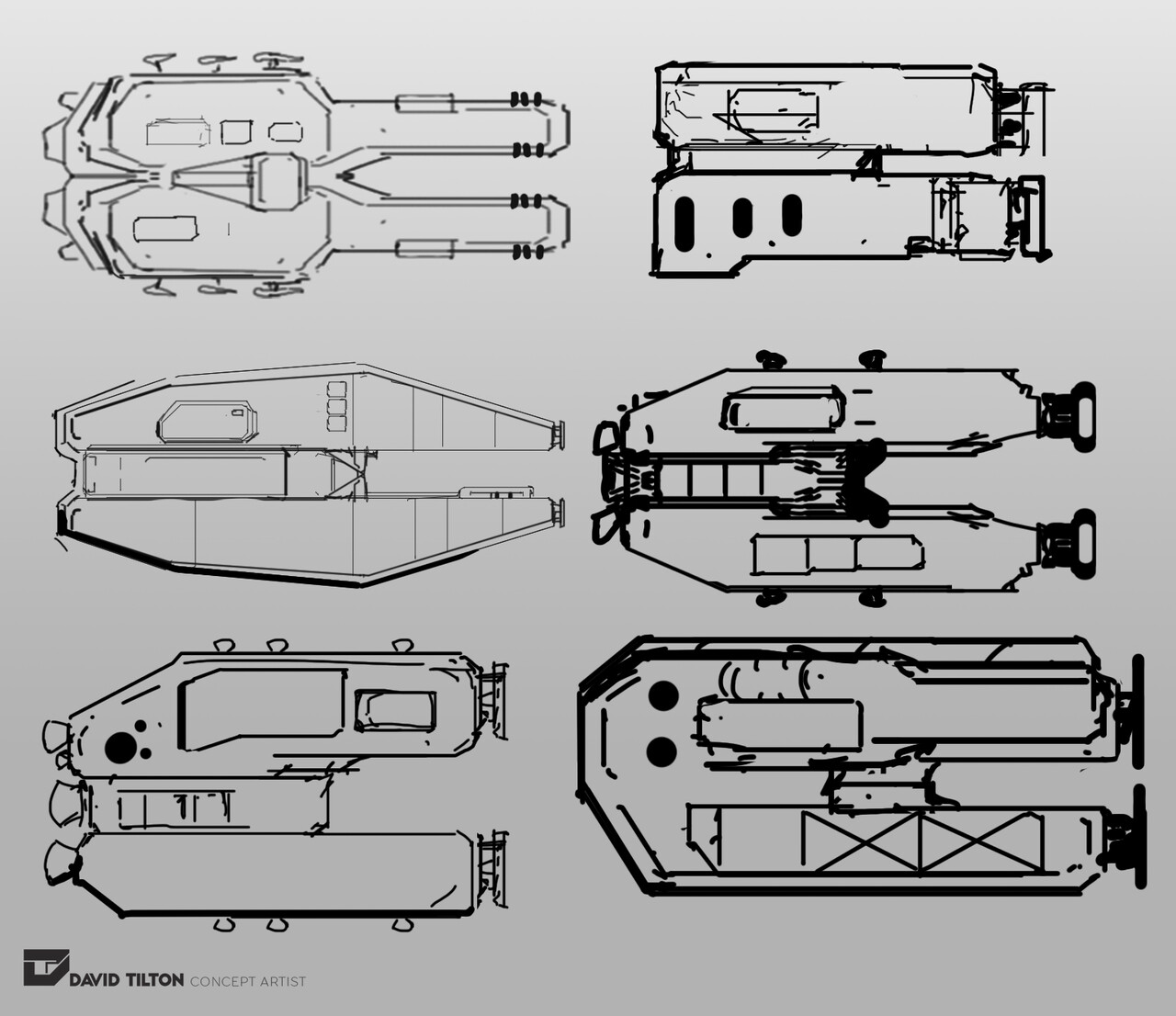 From those thumbnails, I liked elements from a couple of them and threw them together into a final design. 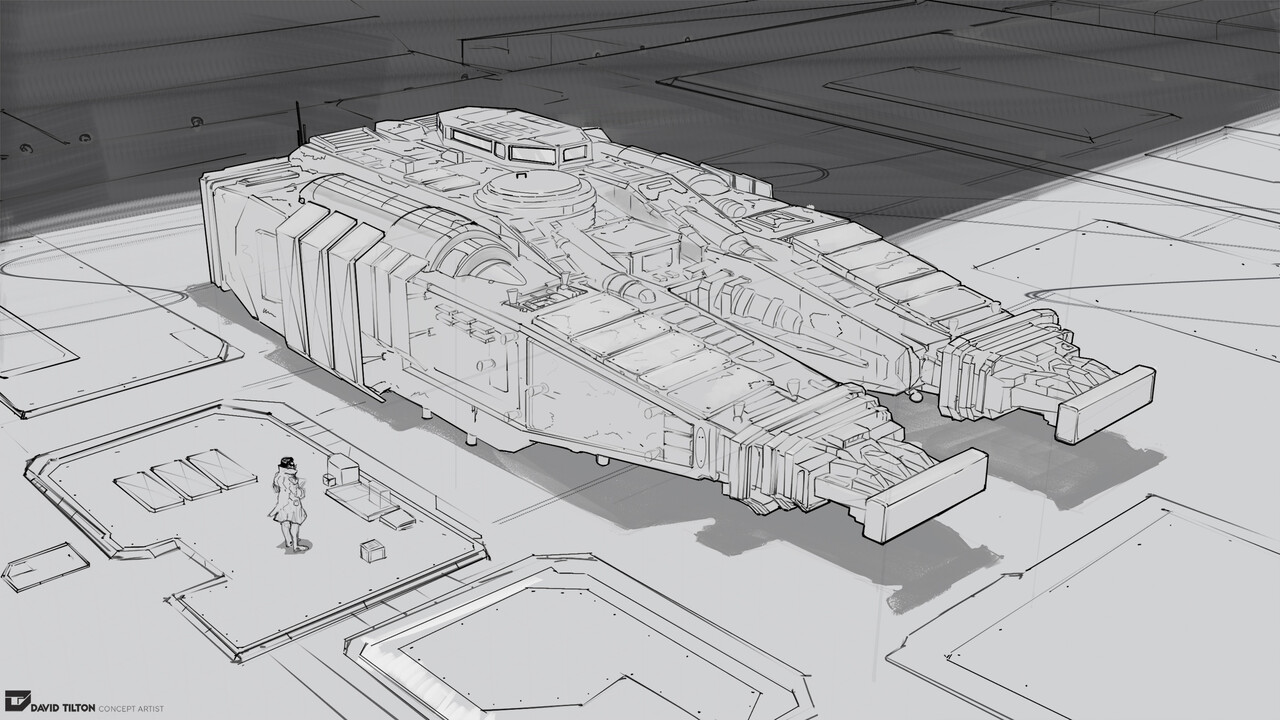 3/4 Sketch of the vehicle 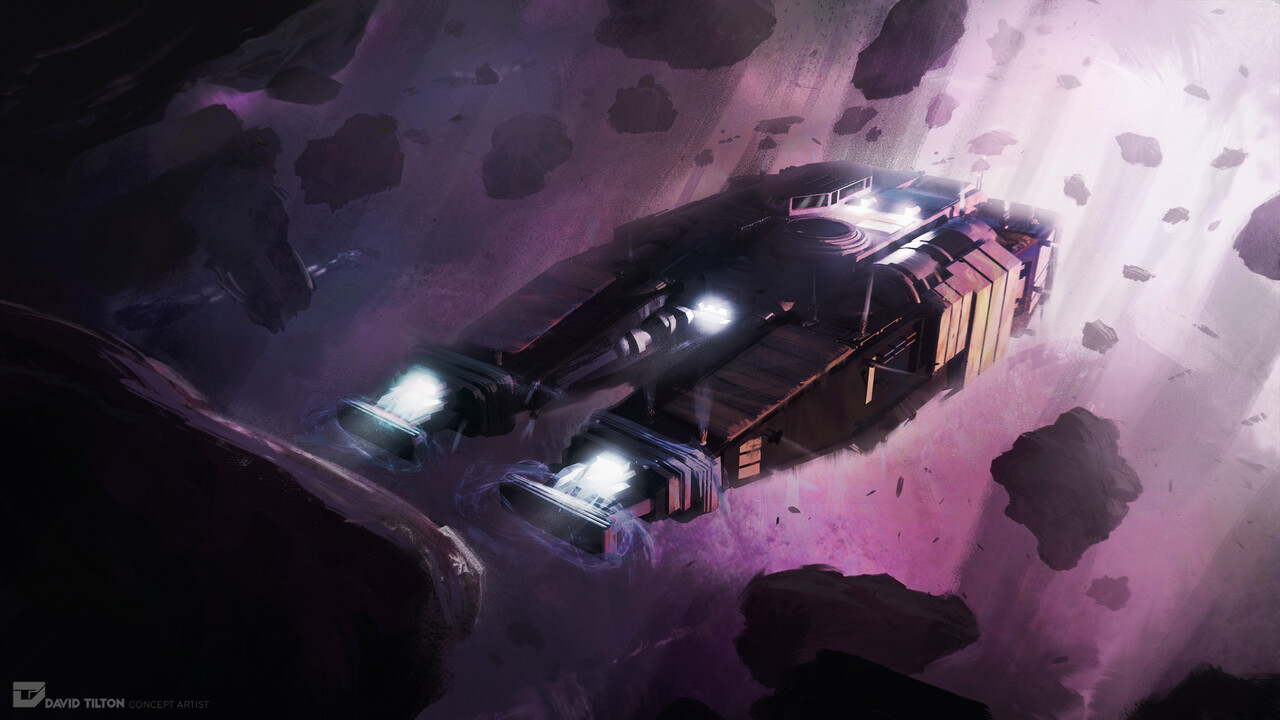 From there I started on a presentation illustration. First building out the ship in 3D (I use Blender) then rendering it in Octane and painting over it.

Going forward I will be just showing the design process of the rest of these elements listed above. Feel free to ask questions in the comments!

Now that I had gotten the basis for my design language out of the way and had dived into the world-building in its entirety I kept moving forward. Next, I started with a mining ship. I wanted this one to be massive so that it could take down bigger asteroids that couldn't be dragged in place for other refining vehicles to breakdown. 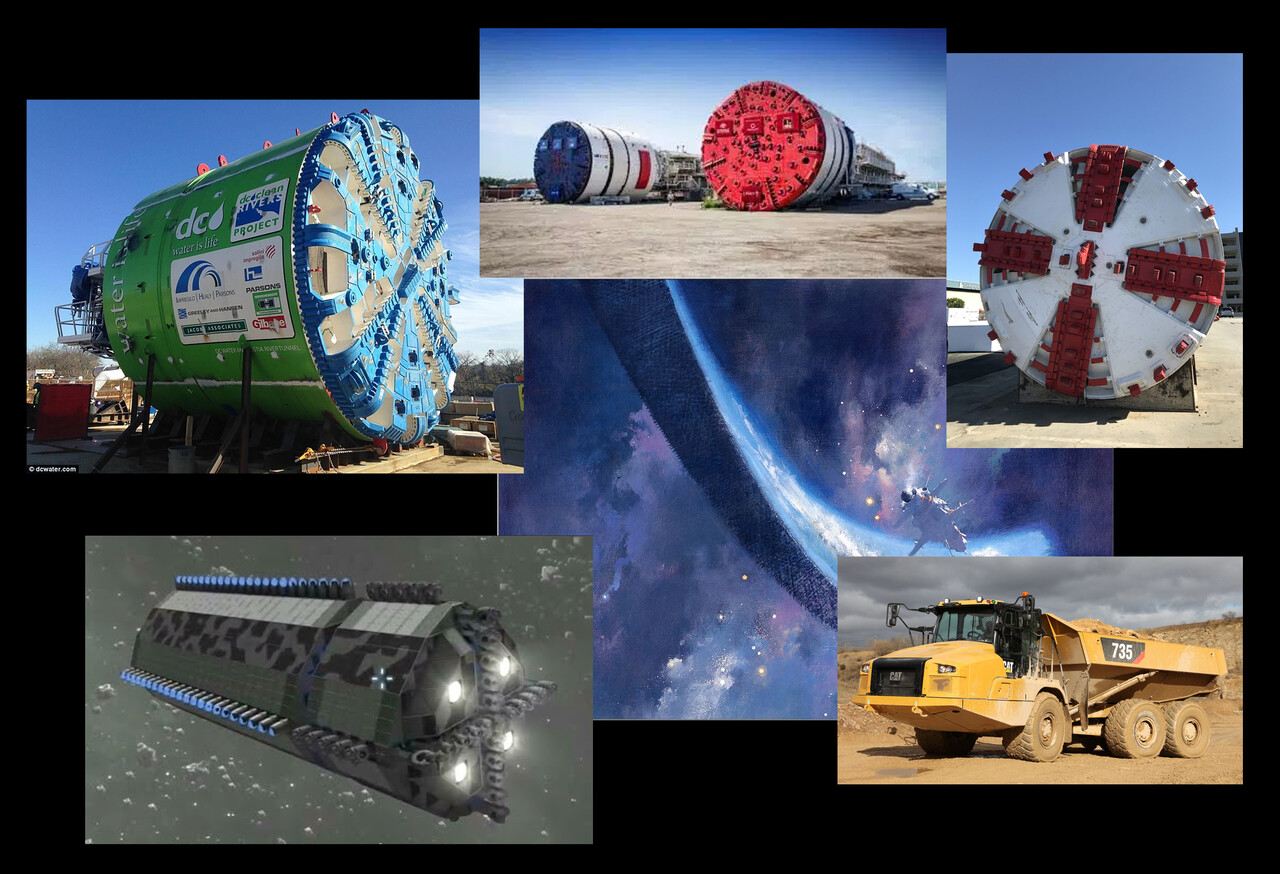 Ref sheet exploring what I wanted to influence this ship. I really liked the drill bit of the top left image so I Incorporated that into the final design. 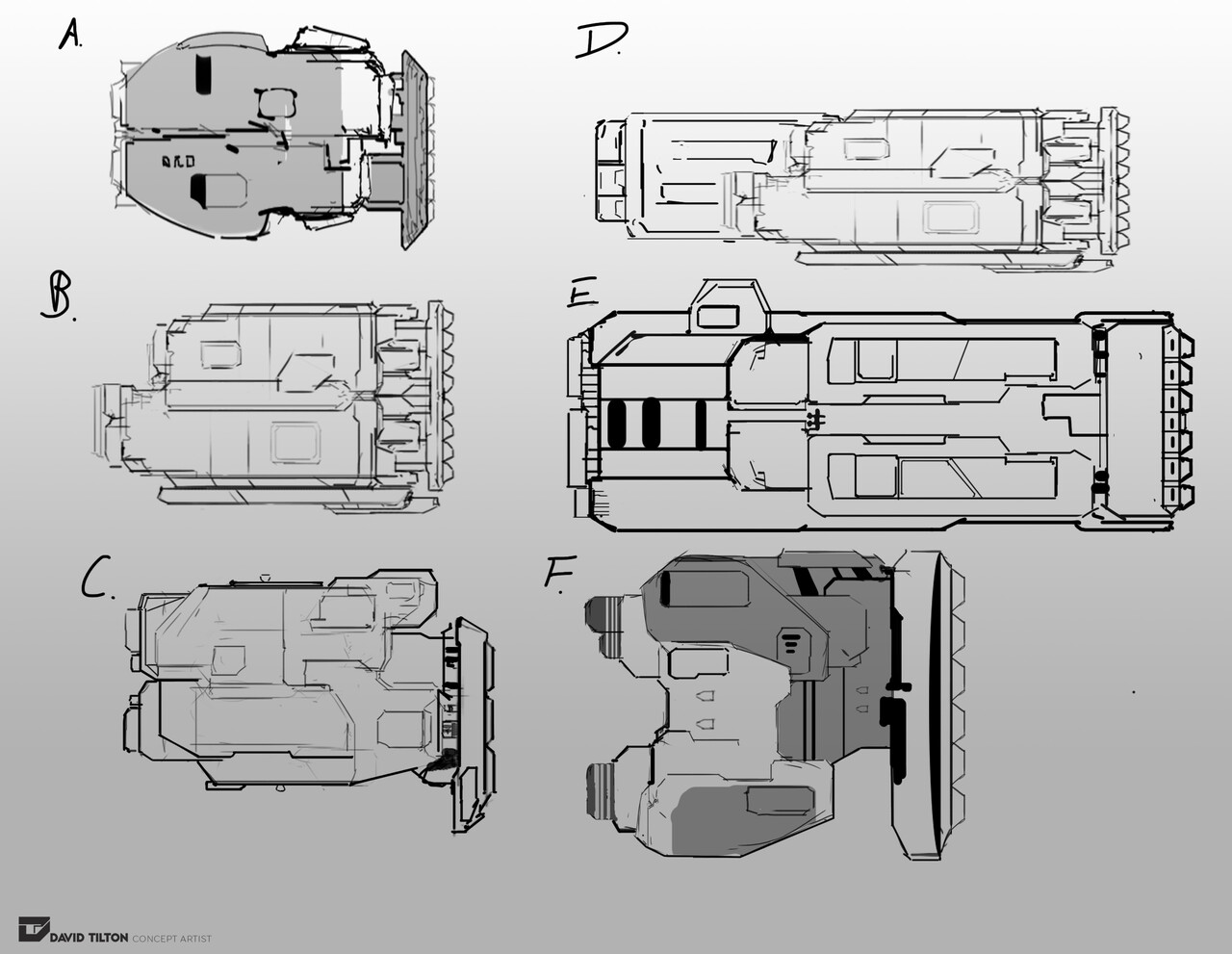 I actually liked most of these thumbnails especially A. But ended up going with B since it fit the aesthetic of the project more. 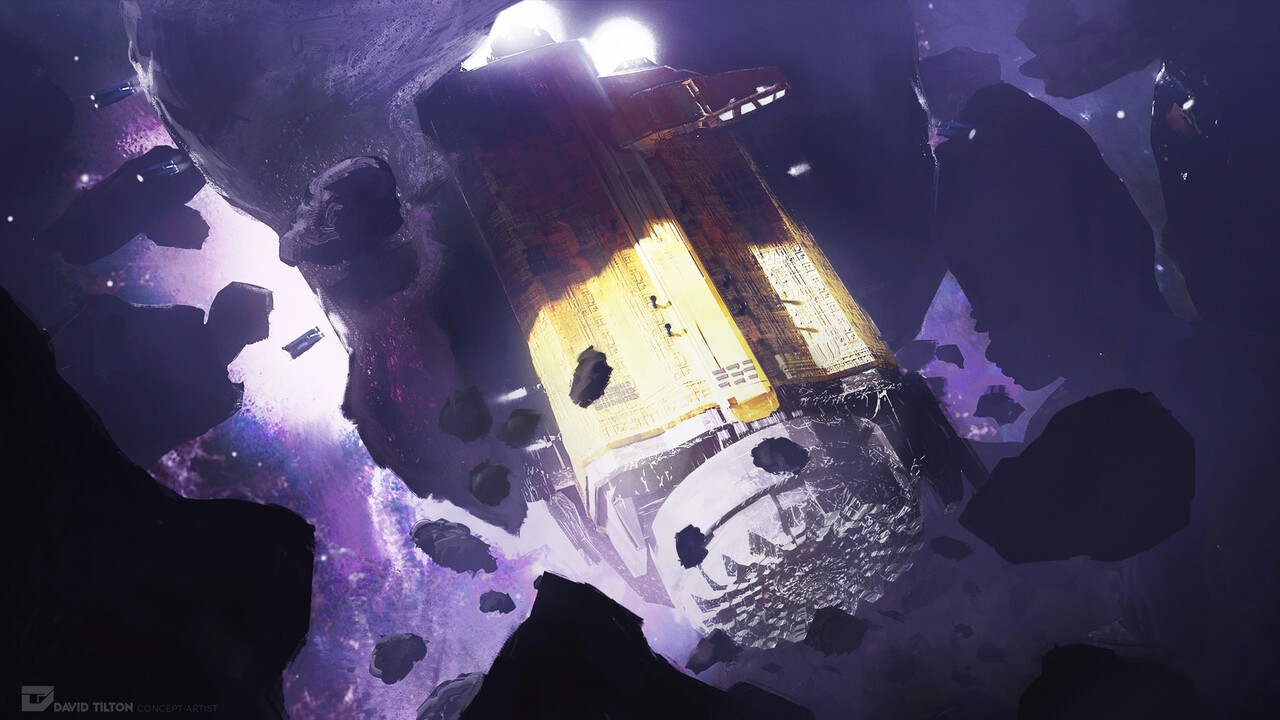 This is the final of this one, wanted to show the asteroid tugs holding a bigger asteroid in place while the drill did its work. 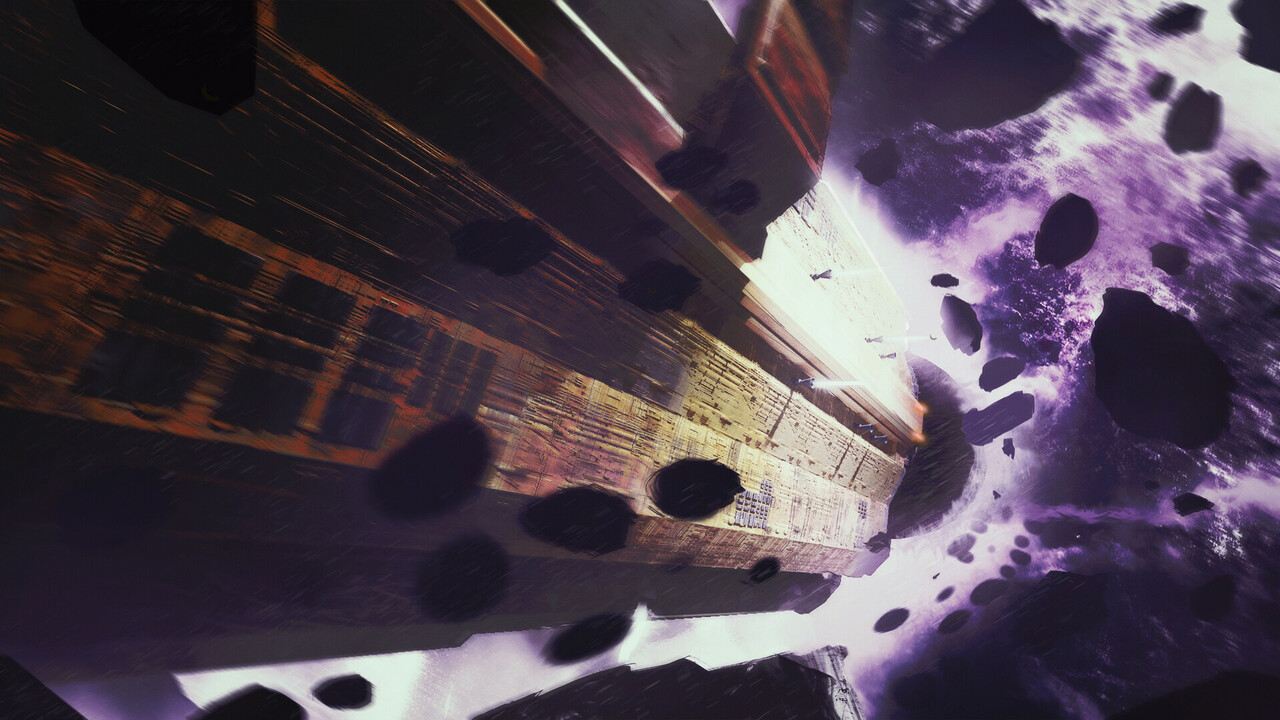 View of the Drilling ship starting to drill through an asteroid, kicking up debris.

For this one, I wanted to design it from the inside out. I started with the repair bay and worked my way out. 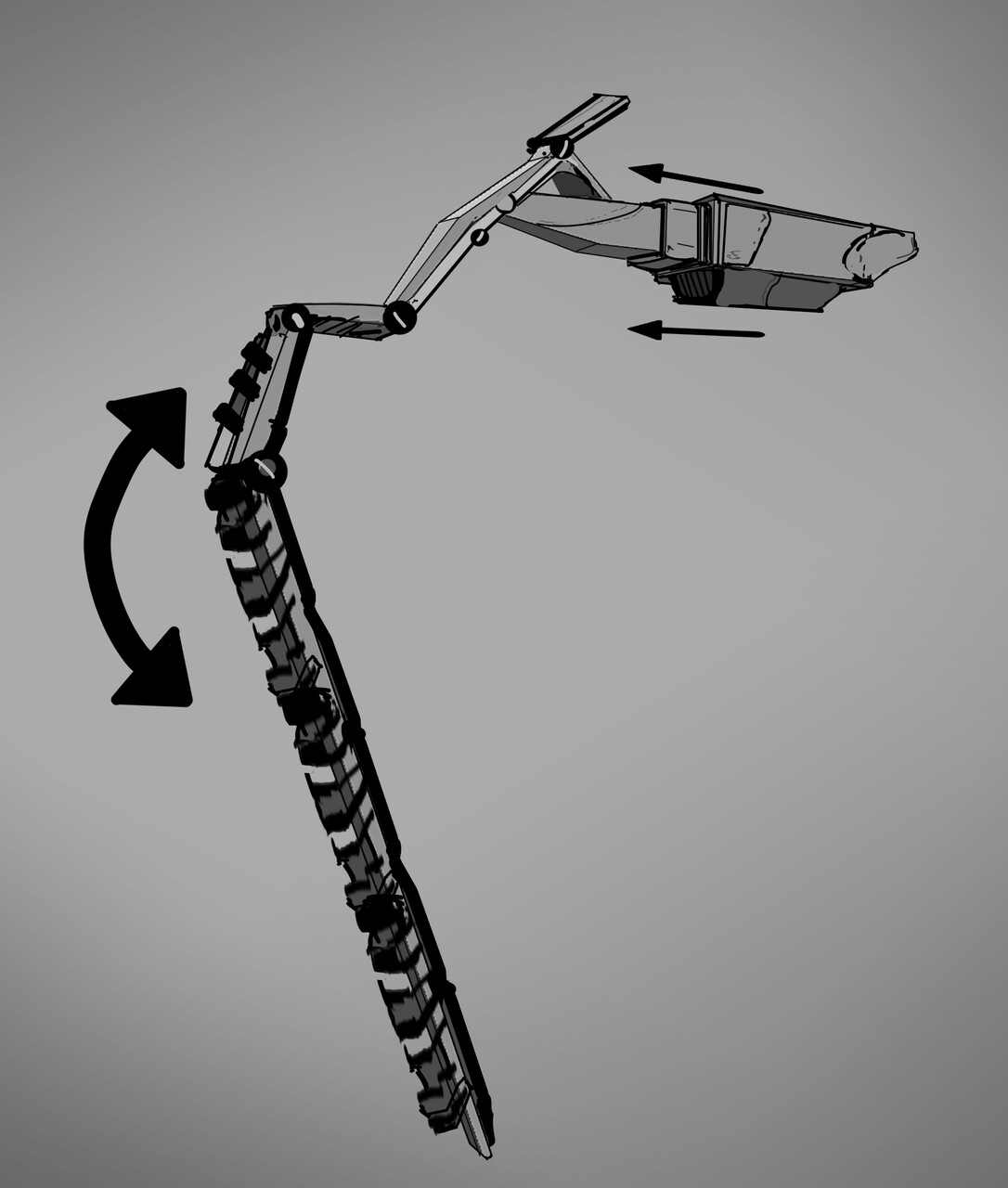 Sketch Of Magnetic Tethers that hold ships in place for repair 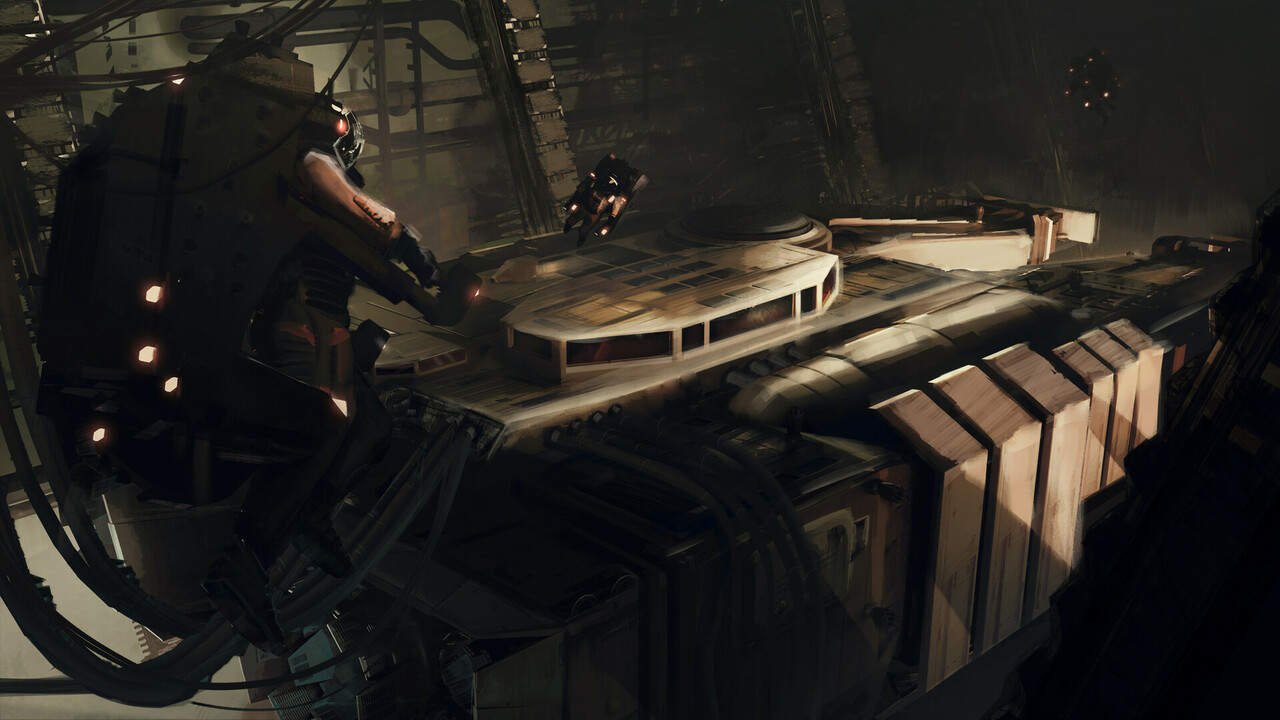 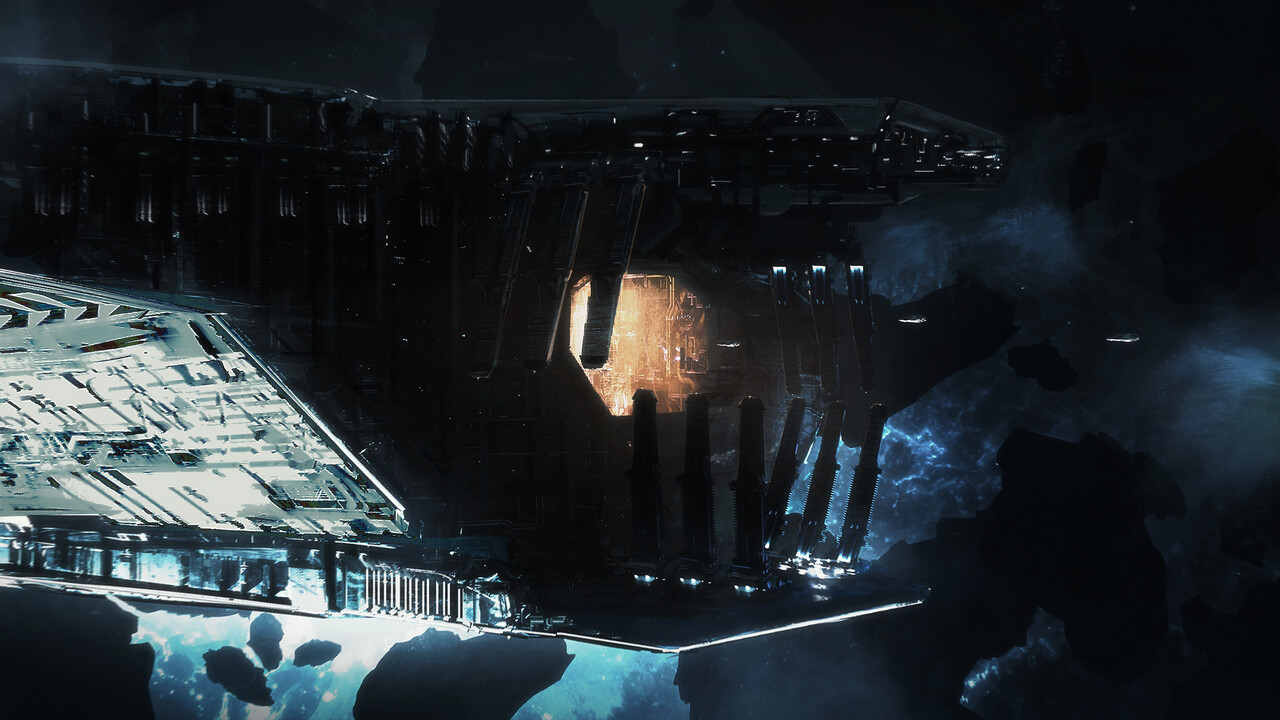 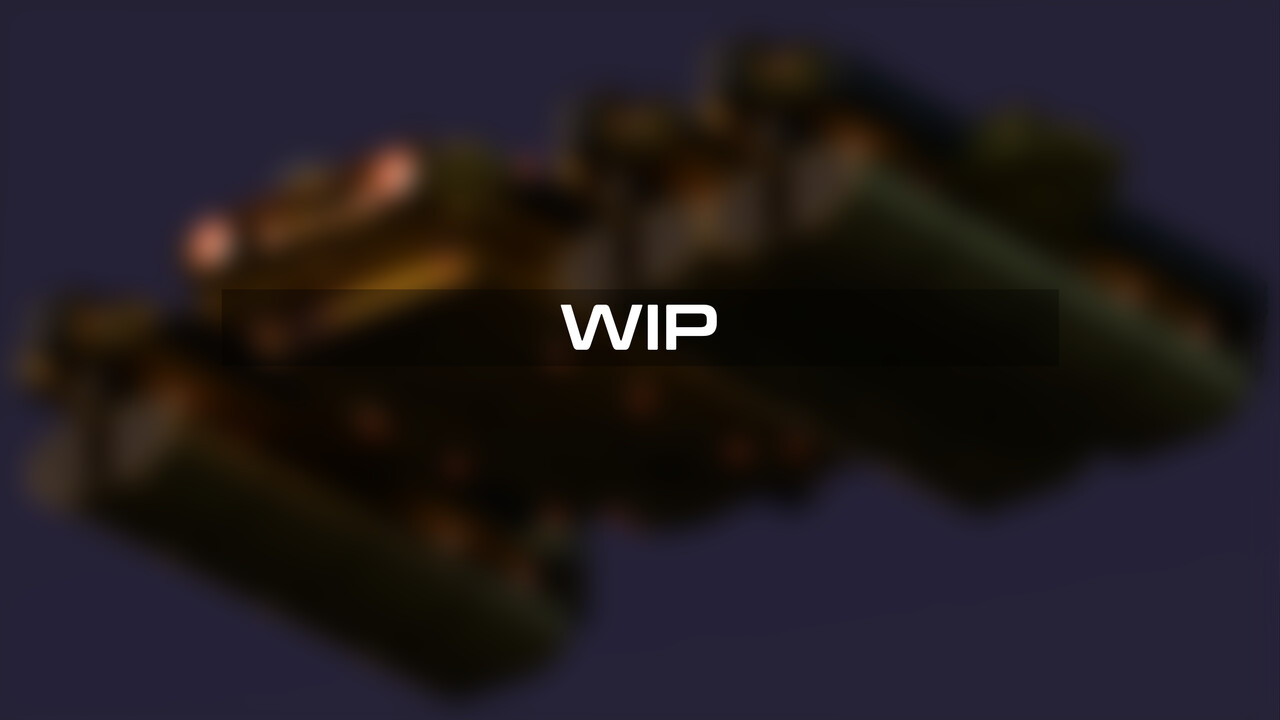 Next, I wanted to establish what the company logo might be, here is what I came up with. After showing them to a few friends I ended up going with MARX since it fit the industrial vibe I was going for the most. 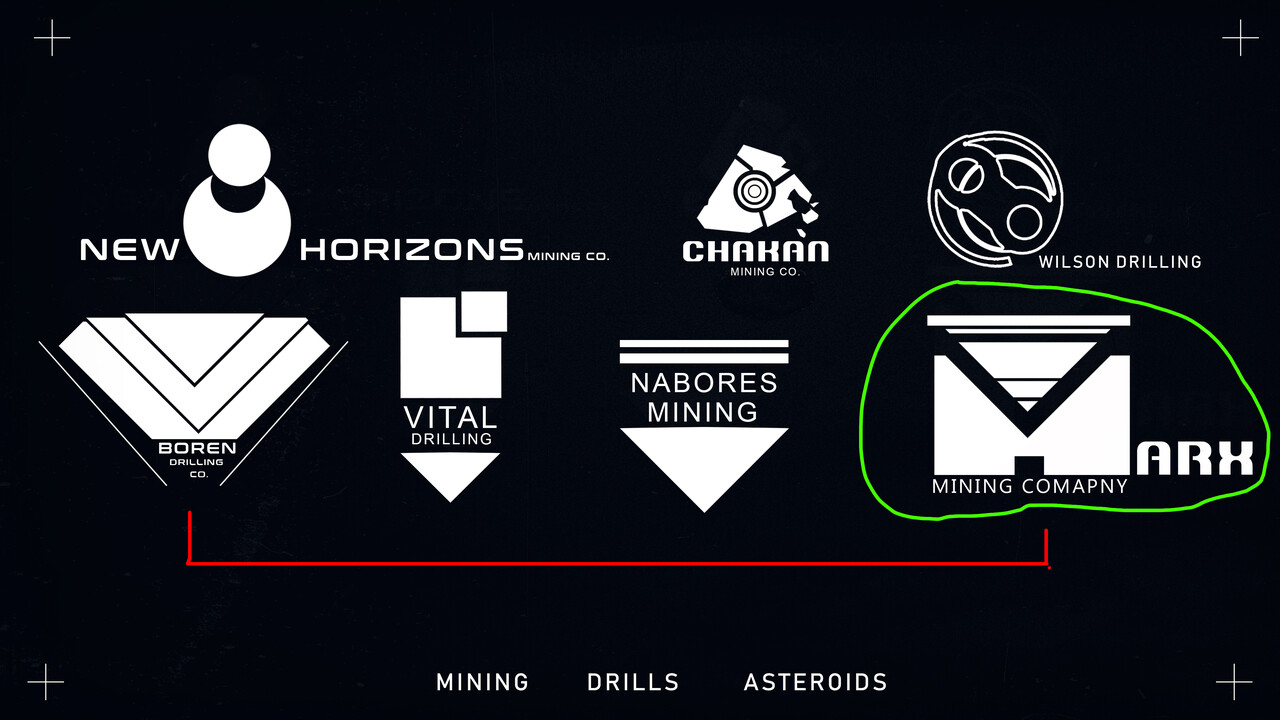 For the astronauts I wanted the crew of these ships to have a light-weight suit that they could maneuver in, along with a maneuvering jetpack as well. Maybe there could be metal alloy paneling on some of the suits that the repair crews use to protect their suits from sparks? Still exploring this. 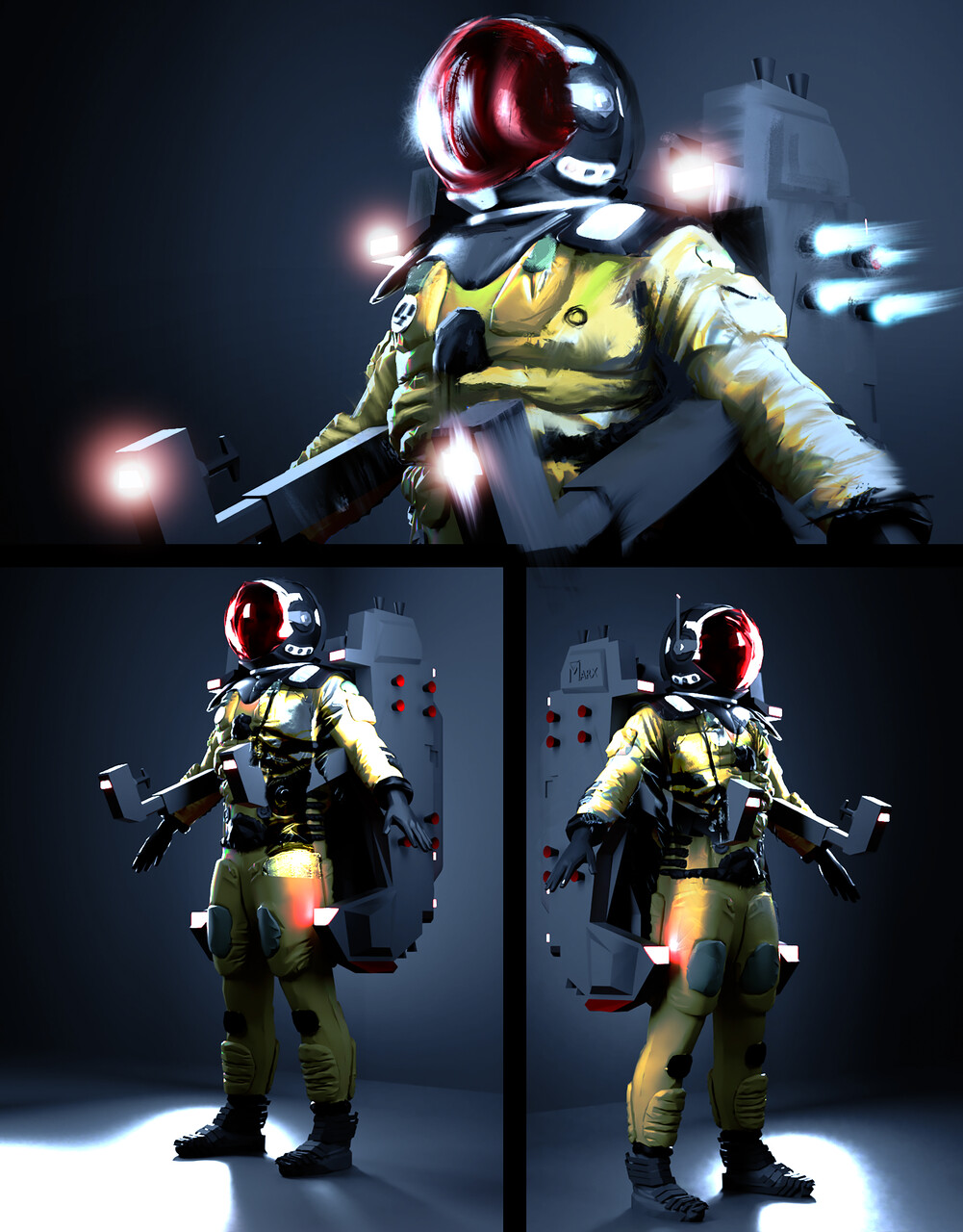 Exploring Ideas for an EVA suit and MMU 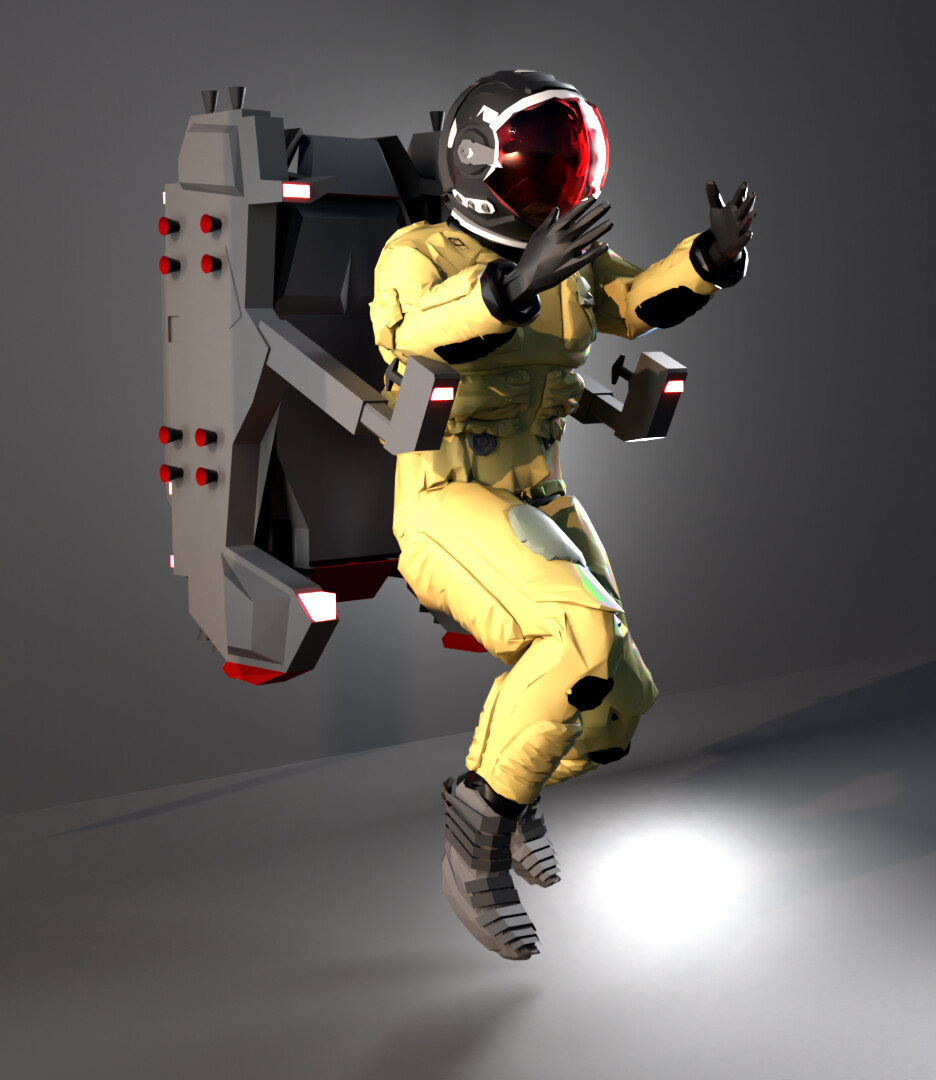 Also learned to rig so I could have a poseable astronaut

For the creature, I wanted something that could maneuver around the spaces of a closely-knit asteroid belt quickly. That lead me to lean towards a creature with multiple arms, referencing back to a squid or octopus.

This bottom one is the one I'm currently leaning towards. I will have to do more exploration on it first.